Being in a foreign land can be exciting as well as amusing. My visit last week to Kathmandu and Lumbini in Nepal to attend Lumbini International Conference on Media and Peace was filled with spiritually stimulating moments as well as lighter, memorable moments. I posted a few lines and pictures on serious, contemplative subjects in my previous posts. In this post, let me share with you some lighter moments pictorially.

A Bhutanese can feel pretty at home in Kathmandu. When you shed the national dress that sets you apart, you can be easily taken for a Nepalese of Tibetan stock from the hills. And if you speak some Nepali, the locals wouldn't have a second thought about your nationality. Although your ability to integrate into a foreign society instantly can be helpful in many ways, it can deprive you of some small privileges that foreigners enjoy, particularly if you are staying in a tourist hub like Kathmandu’s Thamel district. Thamel is so full of tourists that every local seems to exist and work only for tourists. For them, locals do not exist. Or so it seems. If you look like a Nepalese, handicraft sellers do not notice you even if you stand in their shops poring over their items for several minutes. They break into a big grin the moment an English-speaking, fair-skinned westerner pops in. ‘Welcome, sir. Anything you need, sir? This made of all pure baby yak hair, sir. Giving discount also, sir,’ a sullen-looking shopkeeper is suddenly inspired to praise his goods in a stream of sir…sir…sir. You can be forced to feel faceless. It’s something akin to the habit of bigger handicraft shopkeepers in Bhutan. When a Bhutanese walks into a handicraft shop and asks the price of an item, the response one usually gets is, ‘It’s expensive’ or ‘Do you want to buy it?’ In Thamel, a Nepalese-looking person is hardly noticed anywhere – in shops, bars, coffee shops, and restaurants. Even toilets seem to be all marked out for tourists. 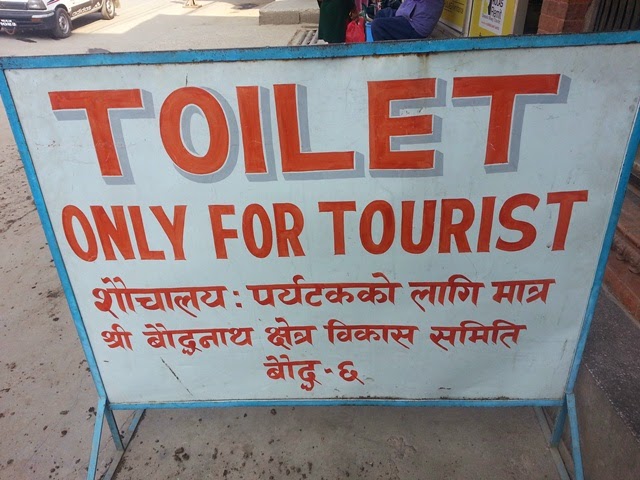 Next time you are in Kathmandu, don’t forget to read the signboards. If signboards are character traits of a city, Thimphu and Kathmandu are unmistakably sisters. A small roadside shop in a corner of Gongabu in northern Kathmandu has put up this signboard. 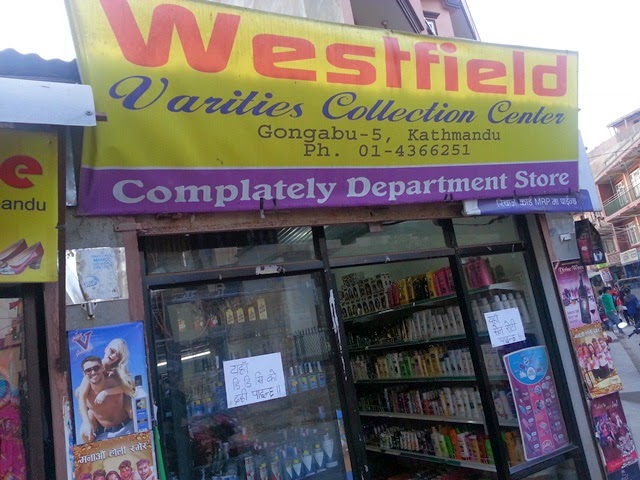 And this ‘shose’ store in Gongabu. 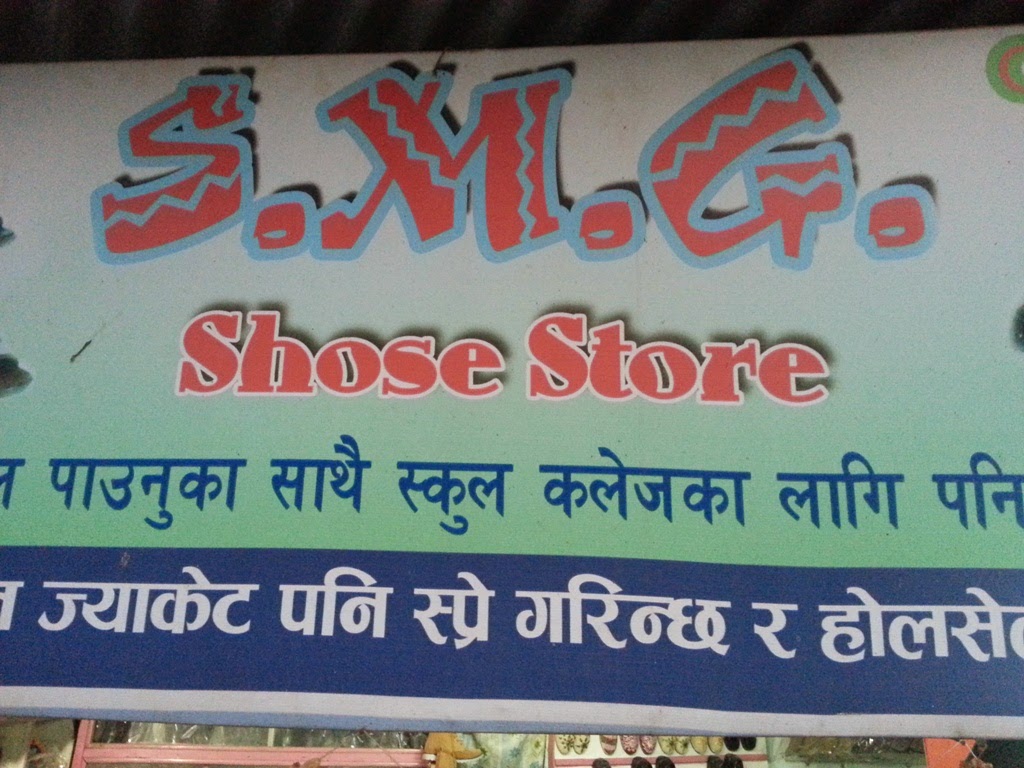 The label on this Tuborg beer is packed with information and messages. Two lines that stand out are: Deserve to sit back/And enjoy responsibly. I like both the lines. The first line uses the word deserve intransitively, which sounds not quite correct but quite creative. Read it again and think of possible meanings. It is interesting, isn't it? The second line is the right thing to do. Comparatively, Bhutan’s Druk 11000 has hardly any text on the label. 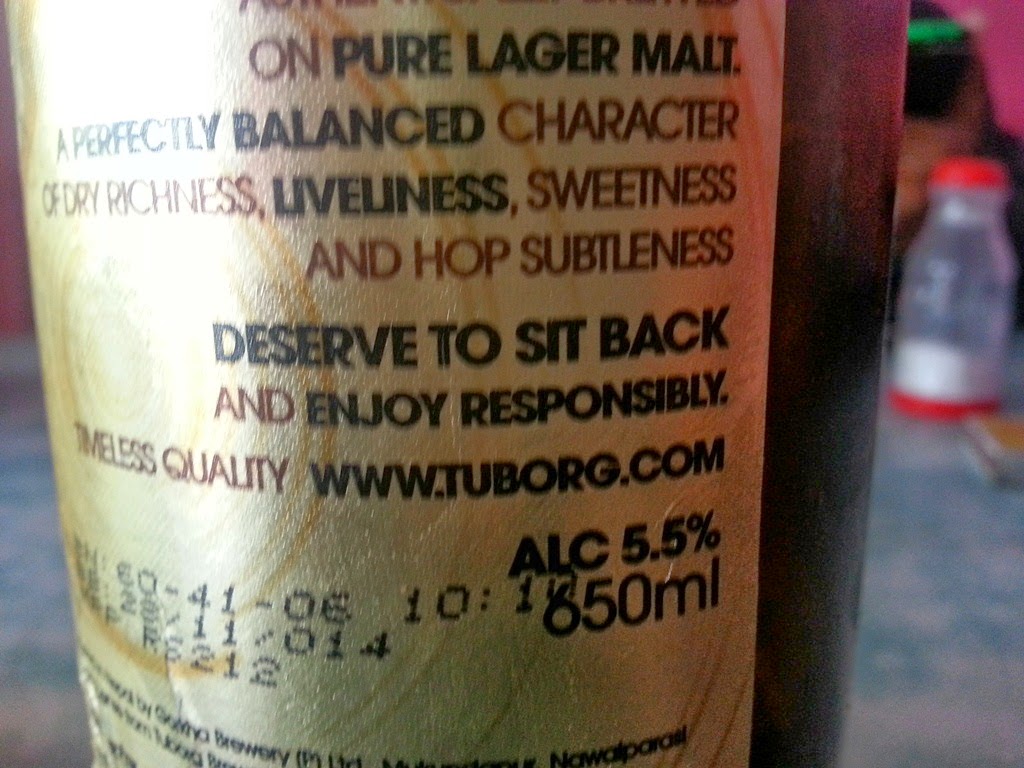 And this on the doors of the toilets at a roadside restaurant between Lumbini and Kathmandu. This is cutely simple and straight. 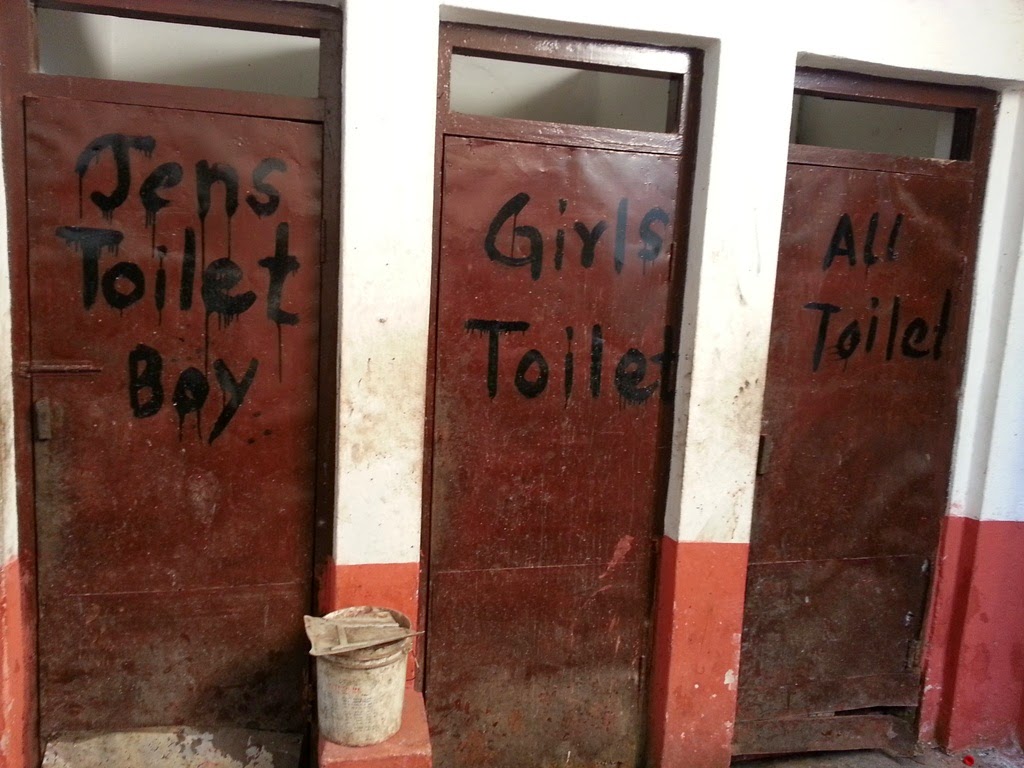 I noticed something on this signboard in English and Tibetan at the Boudha Stupa in Kathmandu. Doesn't the translation of ‘no entry’ in Tibetan read more polite than the Dzongkha translation which is mostly ནང་ན་འཛུལ་མི་ཆོག་? 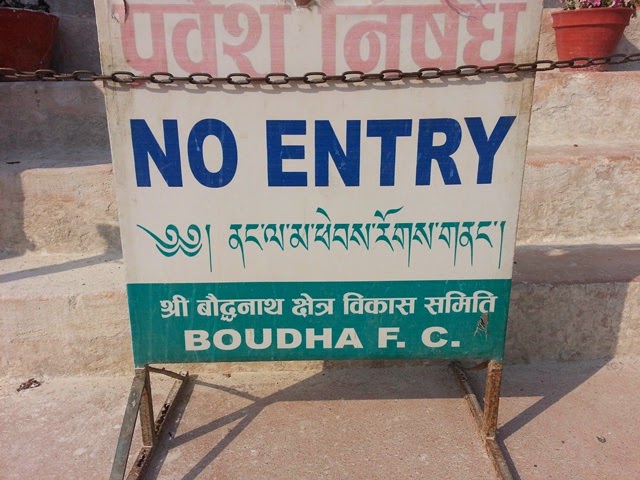 An afterthought for Lumbini

I visited Lumbini in Nepal last week. Two and a half millennia after the birth of Prince Siddhartha, who later became Lord Buddha, the Awakened One, the place is still imbued with deeply spiritual aura. Away from the dusty, noisy, and chaotic Kathmandu city, Lumbini is not only an oasis of tranquility, but also a spiritual haven. Located in the tarai region of Nepal, Lumbini draws people, especially Buddhists, from all over the world. Lumbini Garden, the exact spot where Queen Maya Devi gave birth to Prince Siddhartha, is a magnet to both locals and foreigners. It’s popularly known as Maya Devi Temple although the structure resembling a temple is, in fact, an archeological structure built to protect the spot in the garden where Lord Buddha is believed to have taken seven steps right after birth.

Some 30 kilometres away are the ruins of Kapilavastu Palace where Prince Siddhartha lived until he was 29. Walking over the ruins of the palace, it’s hard not to feel a sense of impermanence. It was the same place which was once bustling with life with Prince Siddhartha at the heart of a beehive of activity. Leading a princely life within the palace walls of the prosperous kingdom, Prince Siddhartha thought all good things surrounding him were going to last forever until he saw a sick person, an old person, and a dead body outside the walls of the palace. He immediately realised that all compounded things were immaterial and impermanent. And he was right. Nothing remains today of that great palace of King Sudhodana except what Prince Siddhartha sought outside the walls of the palace, the meaning of impermanence. Visiting Kapilavastu brings home, powerfully, the message of impermanence Lord Buddha taught. I suppose that’s what a pilgrimage does to the human mind. That’s because we can connect to the sublime because, as Buddhist masters say, each sentient being carries the seed of Buddhahood, that precious gem ready to shine forth when worldly obscurities are removed.

When Thimphu becomes one

Last Saturday, I watched the grand finale of Bhutan Lil’ Champs at the Clock Tower square in Thimphu. A huge crowd had gathered at the otherwise empty place an hour before the show began. The show was supposed to start at 6 pm, but by the time the presenter appeared on the stage, it was already 6:30 pm. By that time, the crowd had swelled and the sky had become dark and overcast. Huge, sporadic drops of rain had made some people in the crowd predict aloud that it was going to rain.

At long last, the presenter, Tawchu Rabgay, introduced the judges of the show after he sang Nyilam Nangluya Mena Mo (Isn’t it in a dream?), one of the first rigsar songs that originated in Sherubtse campus in the college’s heyday. It was composed and sung by one Tashi, a popular singer then. It is a haunting, soulful song of a lover trying to come to terms with separation from his love. In the song, the dejected lover likens himself to ‘the rocks on the earth’ and his love to ‘the stars in the sky’.

As Tawchu Rabgay introduced popular singer Ugyen as the ‘cheychey’ (darling) of the Bhutanese people, the crowd broke into a thunderous applause. Young boys craned their necks to catch a glimpse of him from behind an impenetrable wall of cheering people. Unable to see the singer, one of them shouted to his friend in the front, “I presume he is in the same black gho.” His friend didn’t care to respond, but he was right.

Halfway through the first song, the sound system failed completely. The excited crowd fell silent for a moment and then became noisy. The organisers scurried about trying to fix the problem. A chilly gush of wind laden with rain droplets swept through the crowd, and everybody shouted in unison, “It’s raining!”

Without the help of a microphone, the organisers had no line of communication. But as the crowd became increasingly restless and impatient, Tawchu Rabgay reappeared on the stage, raised his joined palms to the forehead in a gesture of supplication, and made an apologetic bow.

I am followed by

Some of my research papers